A senior manager of Agri-Expo has been elected as a Trustee to the Board of the Royal Agricultural Society of the Commonwealth (RASC). Breyton Milford (33) is the second member of Agri-Expo, and one of only two from Africa, to serve on the Board. 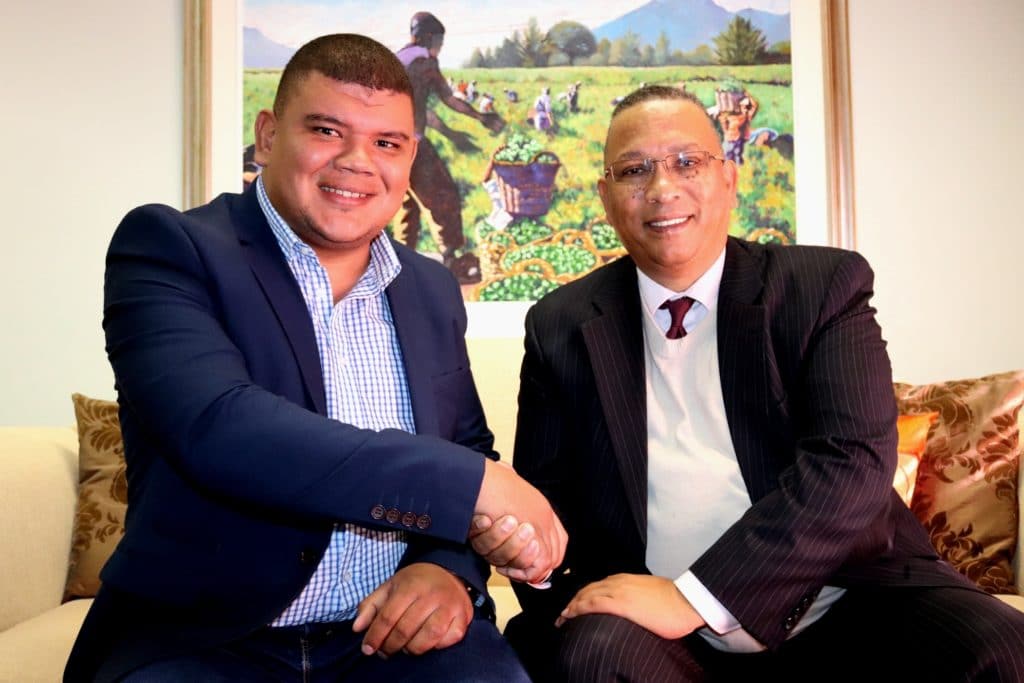 Dr Ivan Meyer, Western Cape Minister of Agriculture, congratulates Breyton Milford, Operations Manager of Agri-Expo,
on his appointment as Trustee to the Board of the Royal Agricultural Society of the Commonwealth (RASC).

Milford, Operations Manager of Agri-Expo and Chairperson of the National Agricultural Youth Society, has been a member of the RASC’s Next Generation forum, for agricultural leaders younger than 40 years, since 2008. Only two seats on the Board are allocated to Next Generation members, a position Milford was appointed during the RASC’s Annual General Meeting on 10 June 2019 in Trinity, Jersey, the Channel Islands.

According to Milford, he is the first Next Generation member from Africa to serve on the Board of Trustees. He gives Agri-Expo the credit: “Agri-Expo, as RASC member, has been developing this platform constantly for longer than a decade in order to promote a positive image of South African agriculture internationally.”

Milford follows in the footsteps of Johan Ehlers, Chief Executive Officer of Agri-Expo, who was elected as a Trustee to the Board in 2017. Milford and Ehlers currently are the only two trustees from Africa.

Breyton Milford, Operations Manager of Agri-Expo, is a newly elected Trustee to the Board of the
Royal Agricultural Society of the Commonwealth (RASC). From left to right are four of the trustee members,
Will Prichard and Aled Jones (both from Wales), Breyton Milford and William Hyde (from England).

Africa members of the RASC are from Botswana, Cameroon, Tanzania, Kenya, Zambia, Malawi, Uganda and Mauritius, with Agri-Expo and the Royal Show in Natal the only members from South Africa. Agri-Expo is the trademark of Cape of Good Hope Agricultural Society, which was founded in 1831 and is the oldest agricultural society in South Africa.

Ehlers says the RASC creates valuable opportunities for international cooperation in agriculture. “Agri-Expo already hosted the first Next Generation Support and Understanding Mission to South Africa in 2018. Milford was the leader of this mission to South Africa with the theme ‘Bridging the gap between emerging and commercial farmers’.”

The Commonwealth’s biennial Agriculture Conference is, according to Ehlers, the RASC’s main platform. Both Milford and Ehlers were speakers at the most recent conference in November 2018, in Edmonton, Canada. The 29th Congress will be held at the end of June 2020 in Norwich, Norfolk, England and the 30th Congress from 13 to 18 November 2022 at the Cape Town International Convention Centre (CTICC).

Dr Ivan Meyer, Western Cape Minister of Agriculture, says Agri-Expo’s appointment as host of the Commonwealth’s 30th Agriculture Conference in 2022 – the first in Cape Town – creates an ideal opportunity to focus the world on South African agriculture. “I am very proud of Milford’s appointment as an RASC trustee as this means South Africa’s agricultural community is internationally recognised for their contribution, passion and commitment to our agriculture.”

For opportunities to get involved in the 30th Commonwealth Agricultural Conference in 2022, contact Agri-Expo at 021 975 4440 or send an e-mail.