The South African Cheese Festival, presented in April this year for the 17th time, was honoured on World Tourism Day as the Festival of the Year. World Tourism Day is commemorated annually on 27 September and, according to the United Nations World Tourism Organisation (UNWTO), creates awareness of tourism’s real and potential contribution to sustainable development. 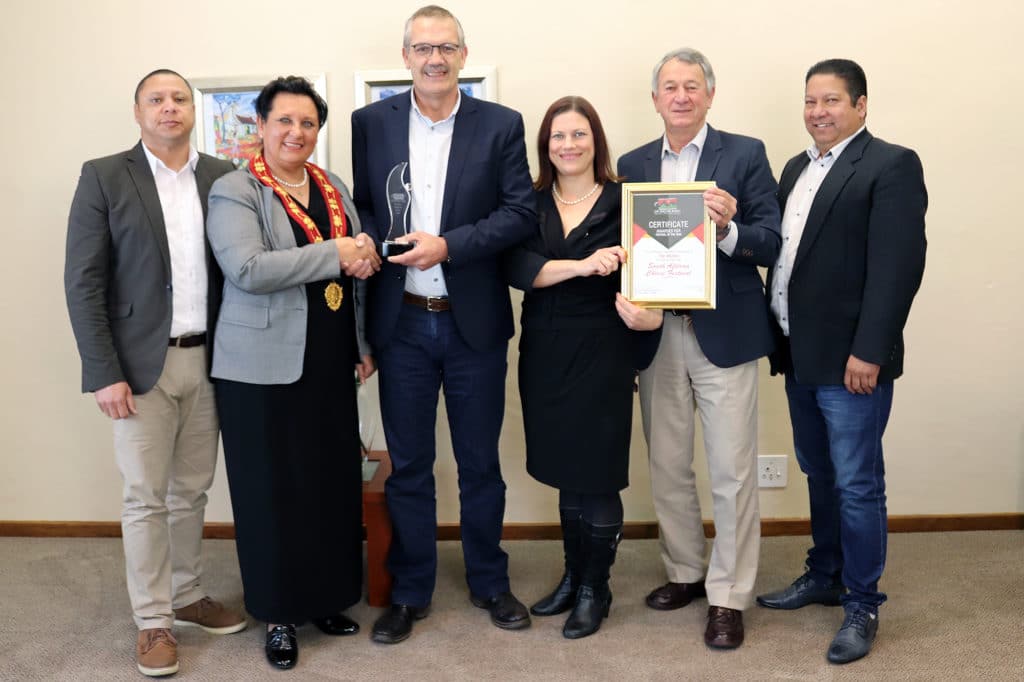 The Festival of the Year Award was made by the Cape Winelands District Municipality’s Executive Mayor, Alderman (Dr) Helena von Schlicht, as part of the sixth annual Mayoral Tourism Awards at a gala function at Simonsvlei outside Paarl. These awards celebrate the achievements of role players in the Cape Winelands tourism industry.

The executive mayor highlighted the SA Cheese Festival in her speech as a world-famous highlight for visitors to the Cape Winelands. According to a statement, the awards emphasize the value of tourism in contributing to the local economy as well as to positive international relations. For every eight tourists staying in the district, one new permanent job opportunity is created.

According to Johan Ehlers, Chief Executive Officer of Agri-Expo, the SA Cheese Festival has grown since 2002 to become one of the largest culinary outdoor gatherings in Africa. This world-class event attracts up to 30 000 visitors over three days, of which more than 40% come from outside the Western Cape. The festival is regarded as an excellent platform for businesses to launch new products and to bring their brands to the attention of both consumers and retailers, including many small cheesemakers who have achieved great success thanks to their participation in the festival.

“It is a special privilege for Agri-Expo to be honoured by the regional authorities for the SA Cheese Festival’s contribution to tourism,” says Ehlers. “The festival is a unique culinary experience of cheese and its many companions, with more than 160 exhibitors displaying their products and creating awareness about the versatility of the variety of SA’s cheese and related products. It is, however, so much more than just a festival – it includes innovation, job creation, entrepreneurship, product development and, of course, consumer awareness,” adds Ehlers. “It is especially encouraging that, through the festival, we have a direct economic impact by boosting job creation in the immediate vicinity, as well as kick-starting small businesses and other entrepreneurs’ product marketing.”

Other successes include media exposure of more than R40 million generated annually, the fact that it is a water-wise festival with no impact on the water grid, and the establishment of successful long-term partnerships between role players in the agricultural and tourism industry, both government and private sector.

“Tourism is everyone’s business, including agriculture, especially in the winelands where farms form the backbone of wine tourism – both for creating visitor experiences as well as job opportunities,” says Ehlers. “Agriculture offers many opportunities for marketing tourism in the Western Cape. Consumers today are more adventurous and therefore we must expose them to the full value chain – from the animal in the field to the cheese on their plate. The challenge of innovation means we need to work together to continuously offer honest and unforgettable experiences that exceed visitors’ expectations.”

According to Ehlers, they are looking forward to further developing these partnerships in view of the 30th Commonwealth International Agricultural Conference, which will be hosted by Agri-Expo in the Cape in 2022.

The SA Cheese Festival has been awarded several times, including the best Consumer Exhibition in Africa (larger than 12 000m²) by AAXO (Association for African Exhibition Organisers). The 18th SA Cheese Festival takes place from Friday 26th to Sunday 28th April 2019 at Sandringham Estate outside Stellenbosch. Tickets are available at Computicket from 1 December. For more, visit www.sacheesefestival.co.za.